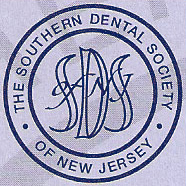 Excerpt from History of Dentistry in South Jersey
Edited by Milton B. Asbell, DDS. MSC MA

Organization of the dental profession in the southern part of New Jersey was preceded by those of other sections of the State. There was the West Jersey Dental Association formed on November 11 1867, with the following South Jersey dentists on its rolls: George C. Brown, President, 1874 (Mount Holly); John B. Wood, the Secretary (Camden). However, after several meetings (the last summoned for July 1868, at Mount Holly) the organization failed to hold together, interest, lagged, counter interests prevailed which superseded the welfare of the profession with the result that it was soon disbanded.

The New Jersey State Dental Society was organized on October 25, 1870, at Trenton by a “call” of 27 dentists of all sections of the northern part of the State and a few individuals of southern New Jersey, among whom were J. S. Simmerman (Millville), Jacob Perkins (Beverly), Charles S. Stockton, later President, 1875 (Mount Holly) and G. R. Chambers (Vineland). The State Society was incorporated March 14,1873, and the incorporative act made it “unlawful for any person to engage in the practice of dentistry unless a graduate of a chartered dental college”; provided for a State Board of Examiners to be elected by the Society and for the granting of certificates to applicants who passed a satisfactory examination. The Society took an active interest in building up the profession and in 1880 secured the passage of a supplementary act making it unlawful to engage in the practice. of dentistry unless a regular course of instruction of at least one year had been pursued in a reputable and chartered dental college, or a certificate or diploma had been granted by a board of dentists authorized to issue such. The filing of the diploma with the county clerk was also required. In 1884 a further supplement was passed regulating dental practice; and in 1890 a State Board of Registration and Examination in Dentistry was created, consisting of five persons appointed by the Governor upon the recommendation of the New Jersey State Dental Society and the dental enactments of 1873, 1880 and 1884 were repealed. This Board was given supervision over the practice of dentistry in New Jersey.

At the end of the century there were about 130 dentists practicing in the lower end of the State, unrepresented in local, state or national activities of major importance, although members of organized dentistry in the northern counties in the State Society sought a representation from the lower counties. The project of forming a dental organization for the southern part of the State of New Jersey had been informally discussed by its resident dentists but with no definite action being taken. The history of the Southern Dental Society could not be written without telling the story of “The Boathouse De Eagle,” its owner and his associates. Before the formation of our Society, there was a group of dentists and their wives in the Camden area who found a great deal of real congeniality and comradeship in each other’s company; W. H. Gelston, C.P. Tuttle, A. B. Dewees, W. W. Crate, A, K. Wood, S. Ironside, C. Ironside, J. G. Halsey, A. R. Slade, 1. S. Callahan, W. A. Jaquette, F. E. Mathers-the “Boathouse Gang.”

Long before the Delaware River became polluted and the stench drove one from its shores, many picturesque boathouses dotted the riverfront where fishing and gunning could be had from the Cape far up above the tidewater. Charles P. Tuttle had such a boat-house on a cove on the east bank of the river below Washington Park. From this vantage ground, sport could be had in many directions; gunning and fishing expeditions took this little group up and down the beautiful Delaware in quest of fish and game. To make the picture complete, Dr. Tuttle and his several dental friends planned regular get-togethers (usually on Fridays) and they were never in want for company or entertainment, for here the long summer evenings and environment offered a pleasant retreat from the heat of the city.

On pre-arranged dates this group fished and gunned at the beaches of the Delaware when fishing, for the most fastidious, was at the back door. Gunning in season was of the best and there was no limit of reed bird, mud-hen and duck which flew and fed in great numbers on its-reed-covered banks. The head chefs of the outfit were Dewees and Gelston, and the extent of their culinary art was profound. Planked shad was their specialty. The shad were brought in fresh from the water, dressed and prepared. Large roe shad weighing six to eight pounds, fastened to an oak plank, were broiled in front of a hot fire and, with the trimmings offered, were a gourmet’s delight. A. K. Wood was the official assistant, and his salads and biscuits were a treat. Others present and not assisting in the preparation of meals were drafted to clean up and wash the dishes.

It was the result of these episodes of socializing and comradeship that their thoughts turned to one of fraternizing in their chosen profession as well. Dentistry was rampant with “cut-throat’ methods, but here the seed of cooperation and mutual understanding and professional respect was laid for dentistry in South Jersey.